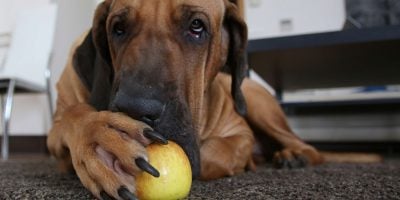 “My dog ate apple seeds, will he be ok?” And beyond that, are apple cores toxic to dogs? Don’t panic and let’s see how safe apples are, and whether or not you should be careful not to let your dog eat apple cores.

Since most conventional dog foods have low nutrient qualities, most dog owners consider giving their dog a superfood treat just to compensate for the lack of vitamins in minerals in their regular diet.

However, fruits and vegetables have different characteristics that can be either good or bad for dogs. Just because it is safe for humans to eat, it doesn’t necessarily mean that is also good for dogs.

Since apples are one of the most available fruit in most regions and fairly cheap, most dog owners consider giving their beloved pets an apple treat.

So, can dogs eat apples? The short answer is, yes. Apples are safe for dogs to eat.

On top of that, most dogs love apples and they will devour their treat in seconds. Most people know that different parts of the apple have different nutritious qualities. For example, apples are very good to cure a dog’s joint pain. However, apple seeds contain trace amounts of cyanide.

So, what if your dog grabs and eats the apple seeds or apple cores while you are not watching? Here is what you should know.

What Is An Apple Core?

In order to understand whether or not apple seeds are safe for dogs, we have to analyze what’s in the central part of this fruit.

Most people will argue that the apple core doesn’t taste any different from the rest of the apple. With that said, the apple core is perfectly safe for most dogs. However, similar to other fruits, the problem usually lies within the seeds that can be found in the core.

Should I Give The Apple Core To My Dog?

It is best to avoid the core of the apple and it should not be given to dogs. Just like bananas where the peel is the biggest risk, consuming apple cores might not have any negative effects on their health, but they present a choking hazard. The core can also cause a bowel obstruction, which is a life-threatening emergency.

With that said, there is ‘nothing’ to worry about if your dog ate the apple core including the seeds. You should check in with your local vet just to be sure about its state, but in most cases, this shouldn’t cause a problem.

It is not recommended that you intentionally feed your dog the core of an apple.

When it comes to apple seeds, it is worth knowing that they contain amygdalin, and if the seeds are chewed, amygdalin degrades into cyanide which can be toxic. However, it is very unlikely that dogs can chew the seeds enough to release this toxin, and even if they did, such a tiny amount shouldn’t cause any toxic effects in most dogs.

If your dog has other health problems like liver disease, even such small amounts of cyanide can cause a life-threatening emergency and you need to contact your vet immediately after this happens.

On the other hand, if your dog is perfectly healthy, apple seeds cannot do much damage to their organs and shouldn’t be a problem to worry about. This doesn’t mean that you should give them the apple core since constant consumption can have affected their health.

Are Apple Seeds Bad For Dogs?

The seeds of the apple are what cause the most concern. As we mentioned in this previous article, apple seeds contain amygdalin and when your dog’s digestive enzymes come into contact with this compound, it will get broken down and releases a toxic gas called hydrogen cyanide.

This chemical is released only when the seed shell breaks. Even though it is very unlikely for dogs to chew the seeds, the contact with its digestive enzymes can be enough for breaking its shell.

Cyanide is a chemical that is toxic to all animals. It can also be fatal in high doses. Symptoms of cyanide toxicity occur very quickly and they include difficulty breathing, irregular heartbeat, seizures, salvations, and even death.

The good news is that there is nowhere near enough cyanide toxin, even if all the seeds from an apple core dissolve in your dog’s stomach.

What to Do If Your Dog Ate The Seeds of an Apple?

First things first, you should not panic when you find out that your dog ate the apple core. In most cases, everything will go without any side effects.

As we mentioned before, the only way for dogs to suffer from apple seed toxicity is by having liver problems. Even with liver problems, dogs can manage to digest the seeds without any problems.

But it never hurts to be safe and takes some extra steps.

Your first step is to indicate any signs of distress. The goal here is to check if there are symptoms of bowel obstruction. Look for labored breathing or shallow breaths. Dogs can also vomit at this stage, so make sure to call your vet immediately.

2. Clean up any remaining core parts

The next step is to remove any unwanted core parts that your dog might sniff out from the floor. You should also check their mouths just because some seeds can be stuck between their teeth.

It is always best to get expert advice, so make sure to contact your vet even if your dog doesn’t show any symptoms. Your vet might suggest a visit or give you tips on how to monitor your dog for any unwanted reactions.

Whilst dogs love apples, as a pet parent, you must be careful not to give them the core of the apple. If your dog does eat an apple seed, don’t panic! Monitor your pup and if they start showing any signs of distress, take them to the vet immediately. As always, prevention is better than cure so make sure you keep apple seeds out of reach from your pooch!