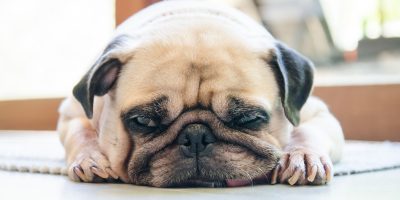 Dog owners have probably considered whether their dogs would care if they died at some point in their lives. Furthermore, for a good reason, dogs are known as man’s best friends. They provide companionship and loyalty, and both the dog and the owner develop emotional attachments to one another. That means that the death of a dog can have far-reaching consequences for the owner itself. That way, maybe you’re wondering how dogs process death and to what extent they understand death.

However, understanding dog emotions and thoughts is difficult; finding an answer to this question will be challenging. Fortunately, this article will help you gain a better understanding of a dog’s reactions to the death of its owner. Let’s start!

We have no idea how an animal perceives or thinks about death. But, we can only evaluate what we see, and when someone in a dog’s life dies, the dog’s emotions and behavior change.

It’s difficult to tell what those sad eyes mean because our canine companions can’t tell us what they’re feeling. Even though dogs do not express their emotions verbally, perceptive pet owners interpret their pets’ emotions based on their behavior. Pet owners recognize these changes in daily behavior as signs of grief, just as humans do. The loss of their favorite individual (dog or human) and the associated bond are common denominators in human or canine grief.

With these interpretations in mind, it is widely accepted that dogs experience joy, sadness, possessiveness, and fear. They, too, become angry and nervous, and they do mourn.

Would Your Dog Know If You Passed Away?

A study from the ASPCA suggests that two-thirds of dogs show symptoms of separation anxiety when their owners have passed away, including whining, loss of appetite, and depression. There is a plethora of anecdotal evidence to suggest that dogs grieve when their owner dies.

For example, in 2014, the Huffington Post published a story about the funeral of a police dog handler in Canada. During the ceremony, the police dog whined and jumped up to sniff at the casket. Everyone at the funeral thought the dog was mourning his owner.

Psychology Today’s website posted another instance of a dog appearing to comprehend death. Steven Kotler, the author, told a story about one of his rescue dogs dying and how another rescue dog reacted. They placed the deceased dog on a blanket, and the surviving dog continued to pull a blanket over the dead dog’s head. It appeared to Kotler and his wife to be burial-like behavior (or cremation-like). The actions were repeated, leading him to believe that dogs are aware of death.

We may not fully comprehend the emotions that dogs experience. Scientists are still trying to figure out if dogs grieve and squeal when their owners die. Although we don’t know whether dogs can tell when their owners have died, one thing is certain: their love, dedication, and commitment endure a long way.

Do Dogs Have a Favorite Person?

Dogs frequently select a favorite person who matches their energy level and personality. Furthermore, certain dog breeds are more likely to bond with a single person, increasing the likelihood that their favorite person will be their only person.

A dog prefers to be with someone who is not its primary caregiver. However, most dogs form attachments to the person who gives them the most attention. For example, in a family with two parents and two children, the dog may prefer the parent who fills their bowl every morning and takes them for a walk every evening.

Furthermore, physical affection strengthens the bond between the dog and the person. If a person is hostile toward a dog, the dog will be hostile toward them. However, if you provide your dog with plenty of pets, grooming sessions, massages, and love, they are more likely to seek out more. For some dogs, it is not the quantity but the quality of attention and affection that is important. Aside from the attention of their favorite people, dogs have favorites based on associations. In other words, if a person is a source of good things, the dog may consider them to be their favorite person.

Would Your Dog Care If You Died: FAQ

How long can a dog remember its owner?

Dogs are known to have a good memory; they can remember their owners even after they have stopped seeing them for a long time. Dogs learn tricks and routines easily. They recognize situations such as when you take the leash for a walk or approach the street where their veterinary office is located.

All of this demonstrates that they have a cognitive capacity. While dogs do not remember in the same way that humans do, their brain performs similar processes. To be more specific, 1 to 3 years without direct contact with the owner is required for a dog to forget him. However, the connection between experiences smells, and sounds, among other things, can cause the dog to recognize you right away.

How do dogs act when their owner is dying?

Dogs may appear listless or uninterested in things they once enjoyed. They may also spend a significant amount of time waiting for their humans to return. Dogs can suffer from depression, and if your dog refuses to eat, you should consult a veterinarian.

They provide comfort in death and other difficult times, such as depression, job loss, or a cross-country move. Dogs can detect when people are dying or grieving by using body language cues, smells that they can detect, and other methods not yet discovered.

Do pets know when their owner dies?

What do pets do when their owner dies?

When a dog loses a two- or four-legged companion, he grieves and adjusts to the changes in his life. Dogs, like people, change their behavior when they are sad. They may become depressed and listless, lose appetite, and refuse to play, and the dog may sleep more than usual and move more slowly, sulking around.

Pet owners recognize these changes in daily behavior as signs of grief, just as humans do. The common denominator in human or canine grief is losing a central individual (canine or human) and the associated bond.

While there is no conclusive evidence that dogs are aware that their owners have died or care if the owner dies, similarly, there is enough research and anecdotal evidence to suggest that dogs understand death. The reactions of each dog to the loss of an owner can be diverse as those of humans mourning. Dogs do feel emotions and show signs of sadness, but how that sadness manifests itself and the extent to which it affects the dog are entirely dependent on the dog and the dynamics of the relationship.

In most cases, if the dog is given the time he needs to recover, he will recover independently. Knowing how our dogs feel will most likely give us hints on what to do to assist them during the most difficult times of their lives.