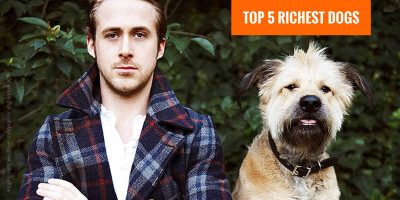 Dogs are the most lovable pets out there. And some of them can actually call for awe and admiration by means of their sheer worth. Yes, like humans, dogs can be millionaires too. Here’s a look at the top 5 richest dogs in the world. Most of them received their fortune after their generous owners passed, and we would love to know who will inherit this fortune once the dogs pass themselves.

Enjoy this different article, a bit lighter than usual!

Gunther IV, a German shepherd, is one of the richest animals in the world today with a total worth of $400 million. However jaw-dropping the fact might be, Gunther IV, who was born around 1991, had inherited enormous fortune from his father, Gunther III. Now, Gunther III was owned by the multi-millionaire German countess Karlotta Leibenstein. Karlotta, in absence of her own children and being the ardent pet lover that she was, left a whooping $80 million for her furry companion when she died. When Gunther III passed away, this vast fortune was passed over to his son. Over the years, Gunther IV’s caretakers had been smart enough to turn this fortune into five times through worthy investments, giving Gunther IV the position he commands today.

Gunther IV had been to several auctions and had even won a rare white truffle in 2001 with the winning bid of $1.1 million. He is a so-called high maintenance dog owning several cars and mansions including estates in the Italy, Germany and the Bahamas. Surprisingly, one of his acquisitions includes the $7.5 million dollars home in Miami that was once occupied by the pop star Madonna.

A typical day in the life of Gunther IV can leave anyone awestruck. He is attended by a personal maid and butler along with quite a few other human staffs. He travels around from one of his homes to the other in his luxurious limousine and enjoys the summers in his customized swimming pool. Gunther IV’s overall lifestyle is surely exemplary in terms of luxury, sophistication and worth. All said and done, speculations have it that Gunther IV is supposedly 27 years old today while German Shepherds have a life span of 10-13 years. However, it is difficult to delve into the matter to find out if he is the real Gunther IV or an imposter.

Trouble was a Maltese lapdog belonging to the extremely popular and often hated billionaire real estate and hotel tycoon Leona Helmsley. Trouble was born in 1999 and breathed her last in June, 2011 at the age of 12, that is around 84 in dog years. Trouble’s owner Leona Helmsley was known for her extravagance and flamboyant personality and keeping to her usual self, she left a hefty fortune of $12 million to her beloved Maltese at the time of her death in 2007. Although the worth was later cut down to $2 million by a judge, Trouble continues to be one of the most high profile and rich dogs that ever lived.

The lifestyle of perhaps the most worthy Maltese could put dog owners to shame. When Helmsley lived, Trouble lived with her at a $35 million dollar worth estate called Dunnellen Hall. After she died, Trouble was flown back to Helmsley’s duplex penthouse in Arizona and Florida in a private jet. Echoing the extravagant lifestyle of her owner, Trouble wore a diamond collar and preferred to travel in a Mercedes stretch limo while she loved eating fresh chicken and vegetables prepared by a Helmsley hotel chef.

Following Leona Helmsley’s death in 2007, Trouble was looked after by a caretaker at the Helmsley Sandcastle Hotel in Florida who received a whopping $100,000 every year just to take care of this rich pooch. About $8000 was assigned for her grooming needs and because she received several death threats, she was also given the privilege of having a 24-hours security guard, which costs about $98,000 a year. This Maltese worth million dollars was one of the richest and also most pampered dogs in the world. She was certainly one of the most high-maintenance and luxurious lapdogs in the history of the animal kingdom for sure.

Conchita, a Chihuahua by breed, was one of the three much loved dogs owned by Gail Posner, the Florida heiress to the corporate takeover king Victor Posner. Posner died in March, 2010, leaving an accumulated fortune of $3 million and a Miami mansion for Conchita and her two sisters called April Maria and Lucia. The news made national headlines quite obviously and more so, because Posner’s son was contending his mother’s will at the court.

However, Conchita was certainly one of the most loved and pampered Chihuahua ever born. She lived an extremely luxurious, sophisticated and charming life being served by dedicated human staffs from head to paw. She went for her weekly spa, manicure and pedicure treatments in her favourite and gifted gold Cadillac.

Conchita had even accompanied Posner on several high-profile lunches and dinners. She was once gifted a $10,000 USD Cartier diamond necklace, which she could not wear because of discomfort. On another occasion, Posner bought her beloved Conchita custom made wigs that were created by Ruth Regina, the former makeup artist of Beatles. The love and affection that Posner had for Conchita seemed bizarre at times.

Posner made sure that her death did not come in the way of the sophisticated lifestyle of her dogs. Hence, Conchita was left with the $8.3 million worth beachfront Miami mansion along with $2mm for her day-to-day expenses. In fact, she left similar amount for the other two dogs so that Conchita does not feel lonely in her mistresses’ absence.

Perhaps the richest Chihuahua in the history of dogs, Conchita along with her two companions, were taken care of by several human staffs including a personal assistant and two bodyguards, who were collectively assigned $24 million to make sure that the care and pampering continued the way it has been.

Oprah Winfrey, the American media sensation and philanthropist has always been known for her keen love for dogs and she owns not one but several of them. However, Oprah’s favourite five dogs need special mention because they are among the richest dogs in the whole world. The three Golden Retrievers named Luke, Layla and Gracie were picked up as cute puppies back in 2006 from the Mojave Desert in California by Oprah and her boyfriend, Stedman. Gracie, unfortunately, died two years later in a freak accident.

The other two include a cocker spaniel named Sadie and the springer spaniels sister duo called Sunny and Lauren. Oprah had adopted all of them from PAWS Chicago.

Now, all these dogs have a collective net worth of $30 million of wealth that is already assigned to them by their mistress. In fact, Oprah Winfrey is so concerned about the future care of her dogs that she has also set up a trust to fund for her furry ones in the sudden incident of anything happening to her.

Needless to mention, all the five pooches Luke, Layla, Sadie, Sunny and Lauren are not just rich but also extremely pampered. All of them are high-maintenance and live a luxurious life much like their mistress, who is known for her classy choices. The love between Oprah and her dogs is exemplary and necessarily, adorable, which is quite visible from the frequent posts and pictures that the actress publishes in her social media handles. Each dog is like a family member for the owner but Oprah indeed shows us how welcoming one can be for his/her furry best friend. Each year, Stedman makes all the 5 dogs wish their mistress on her birthday holding flower bouquets. The dogs, as a result of accompanying Oprah, are pretty much used to media attention too.

The Rodenberry dogs are yet again some of the richest animals in the world. Owned by the popular Star Trek creator Gene Rodenberry and his wife Majel Barrett Rodenberry, who was a voice artist and a television star herself, have their dogs worth $4 million in 2009 when Majel died. The Rodenberry couple, especially Majel, was extremely fond of and attached to her dogs, which belonged to different breeds. The widow of the Star Trek creator was worried about the future care of her furry family members and hence, left a whooping $4 million along with a caretaker and a mansion for them.

Majel, in her will, also assigned $1 million to her domestic employee named Reinelda Estupnian. Apparently, Majel was highly impressed by the way she took care of the dogs and thus, Reinelda was given the right to live in the mansion with the dogs. Majel has also founded a trust that would be dedicated to providing the best-possible care for the dogs.

The Rodenberry dogs lived a sophisticated life with several human staffs to attend them from head to paw 24*7. They travelled in expensive cars, ate high-quality foods prepared with care solely for them and often accompanied their mistress to high-powered events and gatherings. The richest dogs in the world are certainly examples of the bond between humans and their best friends.