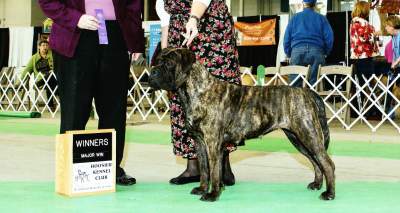 Ishana Bullmastiffs is the home of hand raised Champions coming from excellent pedigrees. Anna Figueroa accepted to answer a few questions about dog breeding. We are flattered she did as she is an influential Bullmastiff breeder and her opinion and passion count.

We are home to Am/Can CH. Leatherneck Ishana’s Shadoboxr OFA, Gold ROM, AOM with frozen semen available to bitches of merit. We only breed our champions and all dogs are certified for health.

You realise that Anna from Ishana Bullmastiffs breeds like very few dog breeders do. She cares for her dogs, for her old senior bullmastiffs, and she wants her bloodline to be as healthy as possible. More than just wanting that, she does every health screening she can to make it happen. And it works.

Ok, you’re not here to read me so let’s get straight into the interview!

Please introduce yourself and why you got involved with Bullmastiff breeding?

I am Annie Figueroa of Ishana Bullmastiffs.

I met my first Bullmastiff in 1994 while at a dog show researching on getting a breed that would fit our family after having Labrador Retrievers for many years. We saw this big dog walking a little, older lady and asked her what kind of dog he was. She told us a Bullmastiff and then proceeded to tell Amos to smile at us which he did carrying a toy watermelon slice in his mouth.

She gave me the information of Amos’ breeder and that began a love of this breed for over 20 years now. I was so fortunate to meet Jean Robinson of Leatherneck Bullmastiffs who started me with my first bully, Ch Leatherneck Buffalo Bull Cody.

She became my mentor and friend and we shared many years of showing, raising and breeding this wonderful breed. The Bullmastiff community lost a great lady and teacher when Jean passed and there isn’t a day that goes by where I don’t think about all the knowledge and friendship she shared with me.

What are the differences between the Bullmastiff and the English, Neapolitan, French and Tibetan Mastiffs?

Although I don’t know as much about other mastiff breeds I would have to say that what I find in the Bullmastiff is a dog who was bred to do a job and do it well.

They were bred to guard English estates against poachers in the mid 1800’s. Also known as The Gamekeepers Night Dog, their job was to go out with the keeper and search for poachers. When he found one he would run them down and hold them until the gamekeeper came and apprehended them. We have a dog with a strong rear to launch himself after a poacher and a strong front to maintain balance.

The Bullmastiff was bred to be 60 percent mastiff and 40 percent bulldog, not the bulldog of today. The mastiff was too slow and didn’t have the drive and the bulldog of those days was ferocious and too aggressive. The combination was perfected until we now have a wonderful guard and family dog.

What would you like the Bullmastiff, as a breed, to become in 100 years from now? Do you see the breed follow a particular path?

The Bullmastiff has been around for over 200 years. Like they say if it’s not broke don’t fix it. I think the Bullmastiff today has changed a little since they came on the scene.

With the room for interpretation there is in our breed standard you will often see both in the show ring and both doing well.

What mistakes are many Bullmastiff breeders doing currently in their breeding program that could affect the breed negatively in the long run?

There are many successful and conscientious breeders today, though not all breeders necessarily follow sound breeding practices.

A good breeder does health clearances and assures that both stud and dam have passed. I do heart, hips, elbows, eyes and thyroid and checking patella is something I have started doing.

Our standard calls for a nearly square dog, not much longer than they are tall. We often see longer backs which makes for nice movement but not necessarily correct. The head of a Bullmastiff is what distinguishes him: 1/3 muzzle to 2/3 skull with proportions looking like a cube on a cube.

We need to be careful to resist getting a dog that looks more like the Bulldog or the Mastiff. The Bullmastiff is a proud and majestic looking dog and that is something we need to preserve.

Could you guide us through your mating partners selection process. What are your thoughts on line-breeding, and are you favoring external blood when mating one of your bitches, or do you breed your own studs?

There are many things I look for in a good stud dog or dam. Breed type and soundness of body and mind are very important. A Bullmastiff temperament is as important as his looks. I look for a dog that embodies the best of our breed and that they have passed the health clearances I expect from my own dogs.

I prefer line breeding. I have done grandfather/granddaughter or half brother/half sister. I tend to stay within my lines. I do look at an outcross if I am trying to correct or enhance in my line. There is less consistency in an outcross.

Many responsible breeders screen and use DNA tests, but how to make other breeders start doing it, too?

According to the Orthopedic Foundation for Animals, hip & elbow dysplasias together are affecting roughly 40% of Bullmastiff dogs, how can breeders help reduce these and all the other hereditary diseases?

Weeding out faults and health issues is only done if the breeder wants to have a healthy breeding line. There are al lot of health screenings that can be done today. Not breeding dogs that don’t pass and spaying and neutering dogs that shouldn’t be bred is really the only way we can improve our dogs’ health and the genetic tendencies to certain conditions.

Unfortunately, you can’t make some one follow these practices. There are plenty of unethical breeders who only breed for money. I think in large part we need to educate people who are interested in our breed before they buy from someone like that.

The American Bullmastiff Association has a wonderful mentoring program and has all sorts of information available on all aspects of our breed. There are also regional and local clubs that often have shows where people can meet and learn about our breed.

Why do Bullmastiffs have such a little lifespan, around 8 to 10 years? Is that something responsible dog breeders can influence?

There again health testing is important. Especially when our dogs become seniors which in large breeds like ours is about 6 years old. I health test my seniors so if something crops up we can deal with it before it becomes a real problem.

Longevity does also seem to be genetically stronger in some lines. Good food, good exercise, and regular vet care all contribute to longevity.

Right now I have a 10 year old, a 6 year old and one 2 and one almost 2. The 10 year old has slowed down a little but still plays and runs around with the youngsters… just not as much or as often!

Bullmastiffs are strong and imposing, even a playful “bop” with a big paw like that could be detrimental to a young child. Are bullmastiffs good family pets?

Like any dog the Bullmastiff needs lots of socialization and good training. They are loyal and protective of their family and usually accepting of anyone you consider friend and family.

But a Bullmastiff takes his job seriously so he needs to always understand that you are in charge. Like any dog, you never leave children unattended. They need to be taught how to treat the dog as well.

A Bullmastiff likes nothing more than to be close to his family, and going as far as laying on your feet or just having a paw near you.

What diet are your dogs following? Are they exercising or rather showing in the ring?

My dogs are primarily on kibble. I do give meat and fruits and vegetables but mostly as treats. Bullmastiffs need exercise. They need stimulation and although they can get by with less that some dogs they still like to get out just like we do. A bored Bullmastiff is a naughty one.

What are your thoughts on (so called healthier) newcomers in the crowded world of dog supplements such as Diatomaceous Earth, Kelp, Seaweeds, etc.

I do give my dogs supplements because I don’t think most dogs foods provide everything a dog needs, especially our large breeds. I started giving all my of dogs from puppy to seniors NuVet. It is a complete supplement that helps strengthen the immune system.

I see a definite improvement in their coats and it helped to give a bitch of mine that had a large litter her nutrients that were depleted caring for all the puppies.

Last one… Any advice you would give to newcomers in this industry, who perhaps would like to breed Bullmastiffs?

Number one this is not an industry. Number two don’t. People think this is a good “business”. It’s not. It costs to care for and maintain a healthy dog. You have to do your homework.

If you are in it for the money, you don’t care about the dog or the breed. Too many good breeders have worked hard to breed beautiful healthy dogs. It hurts the breed and the people who unexpectedly get a dog with health or temperament issues.

Start off with a mentor. Learn everything you can about the breed. Get involved with local clubs. Don’t go in ignorant about all that is involved to be a good ethical breeder.

Are you willing to take a dog back for what ever reason? Will you guarantee their health? Are you willing to lose a bitch during delivery? Do yourself a favor and get a nice Bullmastiff as a pet not to breed. And learn from there.