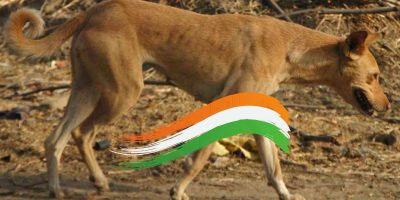 You can find these native Indian dog breeds all over India. Even from small villages to the bustling capital of India. Find out what makes Indian dog breeds different from breeds in other countries. Let’s get started!

Because people tend to go for foreign dog breeds, these Indian dog breeds are ignored by most dog lovers. This resulted in the declining population of certain Indian dog breeds. So if you’re looking to get one, then see the list below of dog breeds from India!

The Indian Pariah Dog is known as the most ancient dog breed that you can find in many South Asian countries. They are also called “South Asian pye dogs” and “Desi Dog” or “INDogs”. Pariah dogs do not have any trace of genetic modification made by humans. They are medium-sized that are pretty much similar to the following dog breeds:

Pariah dogs are intelligent and easy to train. So you won’t have to worry about having a hard time keeping them as a pet.

Chippiparai dogs are a sighthound dog breed from India. Royal families used to breed Chippiparais as a symbol of royalty and kept them as hunting dogs. They have long legs and a lithe frame that enhances their speed. They are also known to be highly intelligent and one of the most biddable dog breeds from India.

Mudhol Hounds have various names that differ from culture to culture. They are known as:

The Mudhol Hound is a tall sighthound with narrow heads that are relatively smaller than their bodies. They are popular around Mudhul Taluk of Karnataka, where they got their name “Mudhol Hound”.

Rajapalayam dogs originated from Rajapalayam Region in Tamil Nadu. Indians would use them to fight battles against the British Cavalry. As of today, the Indian armies use them as guard dogs.

They have a white coat, and one distinct feature is that they have pink noses. There are also whiter coat mutations. However, it was proven that this results in higher chances of deafness.

Indian Spitz is a small dog breed that resembles Samoyeds and Pomeranians. They were bred to adapt to the Indian climate and retain the same intelligence as the German Spitz. They possess white coats and are extremely bright and active. These characteristics made them one of the most popular dogs in India.

Kanni is a rare indigenous breed of sighthound that originates from Tamil Nadu. They are closely related to the Chippiparai breed. However, they are one of the rarest and are already on the verge of extinction.

Kannis are great silent guard dogs that are built to hunt. They are also known to be easily trained but tend to act independently during hunting.

The Gaddi Kutta, or Himalayan Sheepdog, is a type of mastiff dog developed by the Gaddi tripe in the Himalayan region. Indians breed them as guard dogs to protect themselves from leopards and other animals. They are also perfect as herding dogs since they are easily trained and intelligent.

Combai or Kombai is a sighthound that originates in Tamil Nadu and was named after the town, Kombai. Indians usually keep them for hunting, but they are also great as guard dogs.

Kombais are lean and long, but they also have the muscles to be an athletic dog. They are known to be extremely loyal to their humans and affectionate to those they are familiar with. However, they are currently endangered, where you can only find them in a few regions.

Bakharwal dogs are mountain dogs that you can find in Northern India. They are medium to large and are powerful and heavy-boned. Bakharwals also possess a furry coat and a plumy tail. They were bred as settlement protectors and guard dogs. However, because of rabies, they are already on the verge of extinction.

Rampur Greyhounds are native to the Rampur region in Northern India. They are known for their great endurance and speed. Because of this, the Maharajas bred them to hunt and guard them against wild animals such as:

Another thing about the Rampur Greyhound is that they are one of the fastest dogs worldwide, with their speed reaching up to more than 40 miles per hour.

Kumaon Mastiffs, also known as Cypro Kukur, are rare powerful dogs that villagers of Kumaon, Uttarakhand, breed to protect their livestock. They look similar to Great Danes with their big build but thin neck.

There are currently only 150 to 200 of them remaining. This makes them extremely rare even in India, their land of origin.

Pandikonas are considered as a primitive type breed without any human-made alterations. They originated from a small village of Pandikona and are now on the verge of extinction. They adapt well to the environment and are great watchdogs. The Pandikona is also known to be friendly and courageous.

The Jonangi, also known as Jonangi Jagilam and Kolleti Jagilam, is an Indian dog breed usually found in Andhra Pradesh and Karnataka. They are mostly used for hunting or as herding dogs. They are great for guarding livestock since they coexist well with other animals.

However, this breed is not regarded as a pure breed yet. But you can spot this breed during most local dog shows. An example of this is the beach festival of Andhra Pradesh.

The Bully Kutta is a large dog that is used mainly for guarding and hunting. It is known as the Indian Mastiff and is native to both India and Pakistan. Also, they are highly intelligent dogs that can be aggressive when trained to. Bully Kutta dogs are known to be dominating. That’s why only experienced dog owners must handle them.

The Vikhan Sheepdog is a rare breed that is dog owners use as a guardian dog. They have short furs and has a light frame that adds to their speed rather than strength.

Vikhan is a large breed that can be aggressive enough to protect sheep from predators if trained properly. They don’t herd sheep. Instead, they watch for predators while they blend into the flock.

There are Indian dog breeds that can be aggressive. For example, the Indian Mastiff can be aggressive fighters, but they can also be loyal and protective. This will depend on how you train them and how their environment affects them.

However, you have to take precautions if you’re planning on getting a dog that is known to be aggressive. This is to stray away from unwanted accidents between you and your family. Anything can happen when you trigger an aggressive dog. You can turn your one mistake into a frightening moment. Such breeds must be properly educated from puppy age to keep them calm and manage their affections.

Are there any dog breeds banned from India?

There are no restrictions in India that ban the import of certain dog breeds. The Indian government has imposed a ban on importing dogs solely for breeding and other business purposes.

However, dog imports are permitted for the police and defense for internal security. Furthermore, dog imports are also permitted when it is your pet dog. As long as you have the associated valid documents that the dog you’re about to import is truly yours.

What is the best dog to own in India?

The Indian Pariah is the best dog to own in India. Pariahs are known to be one of the healthiest dogs worldwide. They also live well under India’s harsh climate conditions. This Indian dog breed is also well-accustomed to children. Therefore, a great choice for Indian families.

There are street dogs found in India that are mixed with different breeds. But the Pariah dog is known to be the most common out of all breeds. This breed is also used to define Indian street dogs. Even so, it is still the best breed for Indian families.

Most Indian dogs shed. However, the Indian Pariah does not shed. If you compare how much a Pariah shed and the other dog breeds from India, it will be close to zero. You also won’t have to brush or groom your Pariah regularly. Brushing and cleaning their fur once or twice a week is already enough.

bringing in a different dog breed, you must consider the weather conditions in India. Take note that India experiences high temperatures and can be humid. Don’t bring in dogs that are meant to be in colder climates if you can’t provide an adequate setting.

Yes, stray dogs can be loyal. Even though they are not accustomed to having owners, they can still be loyal once a human treats them right. Dogs are known as the most loyal animal.

But street dogs get more attached to those who provide food and refuge. Once they get closer to you, they put their lives on track to ensure your security. Stray dogs can be cute and loving as long as they are shown the same kindness.

There are numerous dog breeds from India that a lot of people don’t know about. If you compare all of the said breeds, most of them are intelligent and loyal. But sadly, some Indian dog breeds are so close to extinction because there are not many breeders out there to help them out with breeding. So, it is important to acknowledge your country’s native dogs just as you would do for internationally known breeds. However, if you’re planning on taking care of one, take time to do some research about their dog profile. Some dog breeds might need more maintenance than other dog breeds. That’s why you need to know how to take care of them.