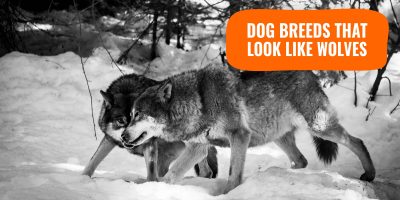 Some people are fascinated by wolf-like dog breeds, and maybe you are one of them. We understand because there are dogs that look just like these powerful animals.

Finally, what you are looking for! Here, discover what are the features of each dog breed that make them look so similar to wolves.

This is probably the most popular breed that people recognize as wolf-like dogs. This is due to the outstanding features that make them so unique and beautiful even from miles away. The characteristics that make them so similar to wolves are many. Studies show that Arctic Huskies are DNA related to an ancient Siberian wolf.

Starting with their compact and strong bodies, their upright ears, and triangular head. Not only that, but also their remarkable thickly double coat that comes in colors such as black and white, gray and silver, sable, or red. These traits make them look a lot like wolves. Another feature these animals share is their facial markings; they tend to have lines of many colors surrounding their eyes. Not to mention their stunning ice-blue eyes and distinguish expression.

What is more, they share some personality traits of wolves. They are extremely intelligent, energetic, and can perform a bunch of activities since they were originally bred as working dogs. They also like howling rather than barking and are as powerful as them. However, unlike their fierce ancestors, Siberian Huskies are very playful and make perfect family dogs.

We can say that the Samoyed is a white wolf dog breed. Even though they look really cute and small, don’t be fooled. These adorable pets share many similarities with wolves. The first one of which we will talk about is their coat.

Samoyeds have a gorgeous double coat that is thick, large, and white, which resembles Arctic wolves. We can say that they are a mini version of them. Other traits that make them look like them are their rounded upright ears and well-built bodies.

These dogs are also highly intelligent, skillful, and love doing physical activities such as hiking, and tracking. However, they are not as temperamental and powerful as wolves. They are calm, lively, and friendly. So, if you are looking for a wolf-like dog, but that is affectionate and loving, this is the perfect option. You can have the best of two worlds with this unique four-legged friend.

Maybe this is one of the first breeds that come to mind when thinking about dogs that look like wolves. And it’s not strange since they are extremely similar to them. Beginning by the fact that they are really big and strong.

As we stated before, this is a strong-headed dog that has a muscular and heavy body. Just as the Siberian Husky, the Alaskan Malamute also has facial markings that are characteristic of wolves. What is more, they have a dense double coat that comes in colors such as gray and white, and sable and white.

These dogs are like wolves in many other ways. They share a triangular face, long snout, and pointed ears. They can survive in tough conditions and are extremely independent, and smart. Having an Alaskan Malamute is quite challenging since they are extremely energetic and need a family that is willing to keep an active life. Even so, they are playful and joyful dogs that are gentle around kids.

If you have not much knowledge about dog breeds, then this one may be new to you. But you know the reason why it is on this list. We can say that this is one of the small dogs that look like wolves. They are not as big as other wolf-like breeds. However, they share other features.

For example, the type of coat and face they have, resemble those of wolves. Surprisingly, despite their size, they were originally bred as herding dogs. Actually, this is what their name means. Therefore, they are considered working dogs with highly herding instinct.

Swedish Vallhunds are far from being couch potatoes, so be aware of that before getting one. They have lots of energy and enjoy playing all the time. These dogs bark a lot, so you will always get to know if someone is coming to visit you.

This is another rare dog breed so it may be unknown for many, even for you. This is because it is a wolf hybrid and an ancient breed. Their thick winter-ready coat and markings of the same color make them look very similar to wolves. In addition to their long wide face, coat, pointed ears, and long bushy tail.

However, be careful before getting one. Even though many wolf-like dogs make excellent family dogs, this may not be the case of this breed. They tend to be temperamental and dominant. They like being the leaders and don’t like being around strangers. It may not be easy to train them, but they are very smart as expected.

They are not aggressive, but they are not suited for all kinds of environments.

The Saarloos Wolfdog is a crossed breed that resulted from the mix of German Shepherds and European Wolves. Therefore, it is more than obvious why these dogs are on this list. Everything tells you that they will have many resemblances to wolves not only because of their name but also because of their parents.

Let’s talk a little bit about their origin. Saarloos Wolfdogs were created by Leendert Saarloos, who was a Dutch breeder, in 1935. Then, in 1981, they were recognized as a distinct breed by the Federation Cynologique Internationale. Now, let’s move on to their characteristics. Saarloss Wolfdogs not only have a wolf-like build (powerful neck, broad head, and long legs) but also their facial expressions are so similar to the ones that we can see in these animals.

They were supposed to be working dogs. However, it did not turn out that way mainly because of their personalities. Saarloss Wolfddogs got too much wolf personality. They are strong, energetic, and need lots of daily exercising. That is why if you want to get one, you must be capable of giving it proper training and discipline.

The Utonagan breed was developed to look like wolves. There is no coincidence here. It was done on purpose. Why? Let us tell you this tiny fact: The Utonagan dog is a mix of Alaskan Malamute, Siberian Husky, and German Shepherd lines. And so, you can imagine the result. What is more, its name means “spirit of a wolf”.

Let’s talk about the similarities between these dogs and wolves. Their size is almost the same, they also have identical color patterns, and they have the typical wolf-shaped head.

However, one thing to point out is that the big difference between them is their personalities. They have such a sweet temperament that contrasts their strong appearance. Of course, they are active and smart, but they are also very playful and affectionate. They can be a perfect family dog because they tend to get along well with people. Also, they are very receptive to their owners, so you must take advantage of this to give them the training they need.

These dogs, as you may be thinking, were bred in Czechoslovakia in the late 1980s. They are a hybrid breed between German Shepherds and Carpathian wolves. Therefore, this is where the resemblances to these wild animals come.

Their body composition and fur make them look similar to wolves. In addition to their outstanding amber eyes, and erect triangle-shaped ears. They also come in colors such as silver-gray. They were originally developed for the Czech military to be attack dogs. That is why is not a surprise that they are strong and powerful. Currently, they are used for tracking, herding, and search-and-rescue.

They are highly independent, dominant, and love challenges. Therefore, they can be the best companions for those people who enjoy adventures. Bear in mind that they require a high level of training and exposure to early socialization.

The Tamaskan is a fairly new breed. It was created back in 2006, just a few years ago. Once again, we are talking about a crossbreed dog. The Tamaskan is the mix of Husky, German Shepherds, and Czechoslovakian wolfdogs. And just like The Utonagan, this breed was also created to look like wolves, with that specific purpose.

In fact, many people can mistake these dogs for wolves. Why? Because they have a thick coat that comes in colors such as red-gray, wolf-gray, and black-grey. Not only that, but they also have a straight, bushy tail. In addition to their long legs, the signature wolf-shaped head, and stunning yellow eyes.

This is known as a very affectionate and caring breed. They are also intelligent, athletic, and strong. What is more, they tend to be more relaxed and less dominant than other breeds of this type.

German Shepherds are extremely loved and known dogs because of their outstanding skills and intelligence. However, another thing that makes them popular is their gorgeous appearance. And yes, as you might have noticed, they have a lot of resemblances to wolves.

Maybe most of the time when you picture the image of a German Shepherd in your mind, it will come out in their famous black and tan coat. However, there are other colors in which they come such as gray, white, and black that make them look way more similar to wolves. Other features we cannot leave out are the conformation of their bodies and their perky ears.

They are excellent working dogs and were bred for countless purposes. But most of them are related to the help and protection of people. They are eager to please their owners and are so active that they love challenges. This, in addition to their incredible skills, enabled them to serve in the police, law enforcement, and military. They are as athletic and strong as wolves, but also as friendly and gentle as any other dog.

The Relationship Between Wolves and Dogs

So, what do you think about after reading this list of dogs that have several resemblances to wolves? You may be wondering if there is actually something that connects these two animals. And the answer is yes. As you have been able to read, there are cases in which the mix of a dog with a wolf has created dogs that look like wolves. Obviously! However, this has not been the reason in most cases.

So, If they weren’t created directly from wolves, why do they look like them? The reason goes back many years and is that wolves are the ancestors of all dogs. Recent studies have determined that dogs descend from an extinct genus that diverged from what though? Let’s find that out. This genus did not come directly from gray wolves as many people think. The thing is that there is a common ancestor between dogs and wolves. It was a prehistoric wolf that lived in Europe or Asia almost 40,000 years ago.

Therefore, if you are fond of wolves, but you cannot have one because they are wild and fierce, and definitely not domestic animals. Then, any of these dogs may be perfect for you. These dog breeds that look like wolves may seem menacing, but have calm and loving temperaments. If you want your puppy to be a little baby wolf, check out our list of wolf-inspired dog names!