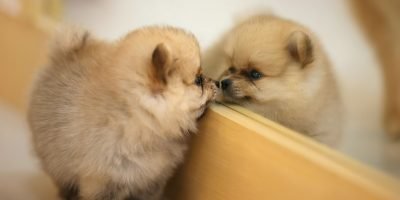 Humans and dogs react differently to what they see in the mirror. Infants start developing self-recognition between the ages of 18-24 months. Unfortunately, dogs do not have the same ability. Dogs can see reflections, but the big question is, do dogs recognize themselves in the mirror?

Read through this article to learn more about the relationship between your dog and the mirror.

Do Dogs Recognize Themselves in the Mirror?

You may have noticed that your dog stares at the mirror for a long time as if trying to figure out who is looking back at them. In the back of your head, you are probably thinking, what do dogs see in the mirror?

Dogs are brilliant animals — you can train them to sit, roll over, and even do Math. Unfortunately, one of the things dogs are unable to do is recognize themselves in the mirror.

According to National Geographic, dogs are unfamiliar with their reflection. When dogs are in front of a mirror, they do not see themselves. Instead, they stare and do strange things such as bark, bow, or paw.

Most puppies see themselves as new playmates. Rather than barking aggressively, they would bark playfully. Older dogs, on the other hand, couldn’t care less. When they see themselves in the mirror, they walk and pretend as if they did not see anything.

Scientists believe that the reason for this is that dogs are not self-aware species. Although, today’s animal behaviorists say that dogs are self-aware and they can pass a self-recognition test using olfactory senses.

When humans walk past a mirror, they stop and strike a pose. We cannot speak for dogs if they can see themselves.

Scientists believe that dogs can somehow recognize what’s in the mirror; it’s just that they are not too concerned about their appearance as humans are. So if you’re thinking to yourself, can dogs see in the mirror, the answer is yes, but they don’t care about it at all.

What Is the Key to a Dog's Self-Awareness?

Dogs possess many complex cognitive capabilities, such as the theory of mind, social learning, and empathy. Pet dogs live with their owners, who teach them tricks that could somehow help them understand themselves. The few indications of self-recognition are the awareness of their size, odor, and memory recollection.

In past studies, scientists only tested dogs’ self-awareness through ecologically irrelevant methods. If you’re wondering, do dogs understand mirrors, there is no scientific proof that owners can train their dogs to recognize their reflections in the mirror. It is a fact that they could not pass the mirror test because dogs, unlike humans and other species, have the sense of smell as their asset and not the sense of sight.

Recently, experts have found evidence that dogs show signs of self-awareness. According to a study from Eötvös Loránd University, dogs can distinguish their body odors from others and recall memories from specific events. It is safe to say that although dogs may not identify their reflection in the mirror, they still show some self-awareness through different self-recognition experiments.

Self Recognition Experiment on Dogs

Do dogs know their reflection? As mentioned, dogs can not recognize themselves visually. The concept of existing self-recognition tests, like mirror tests, focuses on only one sense — the sense of sight that only humans and a few nonhumans can pass.

A new study in Scientific Reports investigated the body awareness of nonhuman species, specifically dogs. Body awareness pertains to the ability of a species to hold information about their body in mind as a separate object concerning other objects.

They tested the study with a population of thirty-two canine dogs wherein they performed the “body as an obstacle” task. While standing on a mat, dogs have to pick up the object and give it to their owner.

When dogs realize that the object moves with the mat, they quickly jump off the mat more frequently in the test condition than in the main condition. Dogs understand that they cannot give the object to their owners if they are standing on the mat.

The result of this experiment is breakthrough evidence that nonhuman species like dogs have body awareness though understanding the consequences of their actions.

One of the best ways to identify an animal’s self-awareness is through the Mirror Self-Recognition (MSR) Test or the mirror test. Psychologist Gordon Gallup Jr. developed the mirror test in 1970. If animals can pass the test, it strongly suggests that they recognize themselves and are self-aware.

How to Conduct a Mirror Test

Many animals such as chimpanzees, elephants, and bottlenose dolphins made it to the list of animals that have passed the mirror self-recognition test. On the other hand, dogs are among the animals that did not make the cut.

How Can Dogs Better Recognize Themselves

Rather than asking, do dogs know how they look, we should learn more about their other senses besides sight. As for dogs, they are more inclined to use their sense of smell and not their sense of sight.

If self-awareness and self-recognition tests are by the sense of smell rather than the sense of sight, dogs will surely pass the test. Fortunately, today’s animal behaviorists have more accurate and more appropriate ways to assess an animal’s self-awareness, especially dogs.

In a 2017 journal entitled Behavioral Processes, Alexandra Horowitz highlighted that dogs could distinguish their odors from others, even when out of context. In her two experiments, she used Gatti’s sniff test to study the behavior of dogs using their olfactory senses.

For the first trial, experts filled two canisters with the dogs’ urine but the other had an added scent. The dogs spent more time examining their urine with an added scent.

For the second trial, experts filled two canisters with the dogs’ urine and an unfamiliar dog’s urine. The dogs spent more time examining the unfamiliar urine than their own.

For the third trial, experts filled two canisters with the dogs’ urine with an added scent and the additional scent alone. The dogs still spent more of their time examining the modified urine.

As for the fourth trial, experts filled each canister with either the dogs’ urine alone or the urine of a familiar dog. They conducted the trial for dogs who were living with other dogs. The dogs reacted the same way as in the first three trials, where dogs paid more attention to the canister filled with modified urine.

The second experiment involved only twelve dogs. At that time, the modification odor was an essential oil, which is neutral but had a detectable smell. The dogs’ reaction was the same as in the first experiment — they prefer to smell and examine the odor of anything but their own.

Findings of Both Experiments

The two experiments revealed that dogs can recognize themselves through the habit of sniffing because dogs are more sensitive to olfactory stimuli. Researchers believe that if a species can differentiate itself from others, although not visually, it is still a sign of self-recognition and self-awareness.

Although we cannot assess a dog’s self-awareness through visual tests like the mirror test, mirrors are not really meaningless for dogs. When a dog sees its reflection, it does different behaviors such as bowing, barking, or does not care at all.