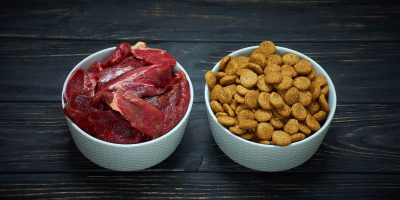 Dogs have a knack for eating yummy food. Their daily diet includes mostly meat and a few mixed fruits and veggies. Yet, sometimes pet owners ask, other than their usual diet, do dogs enjoy eating kibbles? Also, can you mix kibble and raw food? With so many conspiracies around, it’s better to read this article.

Can Raw Food and Kibbles Be Mixed?

Yes, you can mix raw and kibble, provided that it’s a 50-50 distribution. A study about dog nutrition stated that regular canines require fat levels of at least 5 to 20% and protein levels of 15 to 28%. Moreover, most kibbles have 23 to 27% of protein and, according to veterinarians, too much protein can lead to kidney or liver issues.

Kibble factories existed for about 150 years. So, since it’s popular, many owners chose to feed their dogs a kibble diet. Yet, they didn’t know that too many kibbles gave way to an 80% of increased health risks in dogs. Hence, the better way to prevent that is to mix it with other types of pet food.

Despite some owners thinking that mixing raw food and kibble is dangerous, science stated that it’s not. A raw diet is natural for dogs since they were wild animals before, and also it increases their immune function by 80%. Yet, for dogs to have a balanced diet, it’s advisable to mix raw materials with processed meals, particularly kibbles.

Many myths surrounded our dogs’ nutritional capacities. Some owners think that kibbles cause blockage. While others think that raw food itself is indigestible. Hence, let’s debunk the two most common myths about mixing raw and kibble food together.

Myth 1: Mixed Kibble and Raw Meat Are Hard to Digest

Many people claimed that mixing kibbles and raw food mean more harm than good to pets. Well, that is until science proved them wrong. Although a study in 2018 confirmed that dogs digest raw meat faster by at least 3%, there are no studies that state that combining both kibbles and a raw diet causes indigestion.

Moreover, another study about animal feed science in 2021 explained the factors affecting a dog’s digestibility. According to the research, starch is the main binding component of kibbles and 30 to 60% of it came from legumes, tubers, and cereals. Also, dogs won’t have any problem digesting processed starch because they have an apparent tract digestibility of 95%.

A raw and kibble diet for dogs is not such a bad thing. Dogs like a variety in their daily meals and mixing two types of food doesn’t affect them, but rather enhances their appetite. Yet, digestibility varies in the types of dog food. Usually, fiber-enriched pet food is hard to digest.

Veterinarians stated that there’s not much comparison between wet meat food and dry kibble diet. The meat diet is fat and protein-based and kibble is more on carbohydrates and yet, both of their digestibility statuses remain at 80 to 90%.

Further, another research in 2020 specified that you can mix raw and cooked dog food without problems. Well, the results of the study stated that digestibility is pretty much the same, regardless of whether the dog food has protein or plant ingredients.

Domesticated dogs have more starch digesting enzymes compared to their pre-evolution ancestors. So, knowing kibble’s ingredients are at least 30% starch, is enough evidence that it’s digestible for dogs.

Dry kibble has only 6 to 10% moisture, which doesn’t affect its digestibility factors. Also, kibble is water soluble. So, owners can add water or chicken broth to ensure its flavor and softness. Moreover, the practice of hydrating dry kibble not only aids in digestion but also promotes hydration in dogs that don’t drink enough water.

On the other hand, there are pet owners who claimed that kibble causes gastric dilatation and volvulus. However, despite their convincing claims, there weren’t enough studies to approve that possibility. So, as of the moment, the raw and kibble diet of dogs is safe to continue.

The combination of kibble and raw dog food has been an ongoing debate for years. To be precise, it’s not starch that’s indigestible, but, rather, its fiber. Ideally, dogs don’t need that much fiber in their diet since it takes time to break them into pieces. So, scientists made a formula that fiber components in kibbles should only be at 5 to 6%.

Further, raw pet food has 65% moisture, which is why it dissolves faster. Also, to give the verdict on the long-standing debate, raw food has a 90% dissolving rate compared to the 87% of dry kibbles. Well, the difference is not that much, so both types of food are digestible.

How to Mix Kibbles and Raw Food

Feeding raw and kibble food to your dogs has some benefits. For instance, kibble is cost-effective and is a good dental cleaner for dogs. Also, it has a balanced mixture of protein, fats, and carbohydrates. Moreover, when you mix it with raw food, not only that it enhances the flavor, but it also provides more nutrient intake.

By mixing kibble and raw food, you can reduce your dog’s risk of allergies, infections, and also bad breath. Moreover, it also promotes digestive enzymes which help the digestion process.

Yet, take note that a sudden change in meals can upset your dog’s stomach Ph levels. So, when you mix raw and kibble, do it gradually. Additionally, here are some ways how to spice up your dog’s diet.

Now that you know combining wet and dry dog food is not dangerous, you can mix kibble and raw food to arouse your dog’s appetite. Plus, you’re also promoting their nutritional status and decreasing their risk of infections. Yet, note that a dog’s meal should be following its weight. Thus, it’s important not to overfeed your dog to avoid complications.