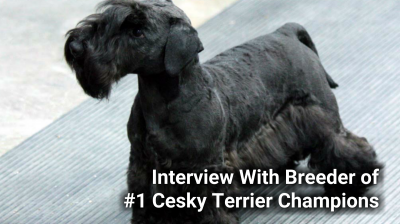 Wendy Craig owns Zlata Praha Cesky Terriers and lives in Acton, Ontario. Marc Joliat and her co-own five Ceskys, including Brubeck, Gypsy, and Gypsy’s puppy Herbie. They pretty much have had the #1 Champion Cesky in Canada every year since 2000. If this is not great dog breeding, then I wonder what this is.

Now you understand why Wendy was a great person to interview, she breeds quality Cesky Terriers and strives at improving the overall breed while consistently raising #1 Champion Ceskies. It is challenging to work with a little known dog breed but Wendy and Marc do a wonderful job at raising awareness of the Cesky Terrier.

For those who will wonder while reading, here is the definition of Theriogenology:

Theriogenology is the branch of veterinary medicine concerned with reproduction, including the physiology and pathology of male and female reproductive systems of animals and the clinical practice of veterinary obstetrics, gynecology, and andrology.

Please introduce yourself and your kennel, Zlatapraha.

My name is Wendy Craig. I have bred purebred dogs since 1985 beginning my devotion to the fancy with Airedale Terriers. In the late 90’s I acquired my first Cesky Terrier and completely fell in love with the breed. In 1999 I had my first litter of Cesky Terriers and registered my kennel “Zlatapraha”.

To fuel my passion for dogs I work as a Project Manager for software implementations and have a CPA designation.

Where does the name come from and is it a full-time career or just a side activity?

Zlatapraha means “Golden Prague” in the Czech language. I acquired my first bitch (Zlata Kvitko) from the daughter of the geneticist who developed the breed. Her kennel is just outside of Prague. She suggested the kennel name building on the name of the girl that I was acquiring to begin my breeding program.

The same day I came across a coffee table picture book while shopping in Prague… the name on the cover… Zlata Praha! It was meant to be! And, yes, I purchased the book.

Marc and I co-own dogs together but only I am involved in dog breeding. Marc kindly manages the website for me. Breeding purebred dogs is a hobby for me and I look forward to retirement when I can devote more time to the dogs and dog shows.

Cesky Terriers are a pretty new breed, and they started to be recognized by Kennel Clubs from 2000 onwards. They are also pretty rare, do you see it as a great thing or are you trying to raise awareness of the Cesky Terrier breed?

The Canadian Kennel Club recognized the breed in the year 2000. The fact that the breed is still fairly rare is both good and challenging. When I get inquiries from people about puppies they generally have done their homework and have thoroughly investigated the breed in order to conclude that they want to adopt one into their family.

The conformation show experience is more of a challenge. The Cesky Terrier is quite different from most other terrier breeds. They have a softer temperament as they were specifically bred to hunt as a pack and therefore get along with other dogs.

The Cesky Terrier’s coat is clipped and is very soft. The topline is not leveled and rises over the loin. The tail is not docked. So the old school judges often overlook the breed in the terrier ring and at the breed level often reward inappropriate attributes that more resemble other terriers.

What path would you like the breed to follow? And, how do you see the breed evolving over the next few decades?

I would like to see more conformity in breed standards around the world, using the FCI standard as the guide. In some non-FCI countries, the standard has been altered too much. The breed standard calls for a low tail set. With the foundation dog breeds being the Scottish Terrier and the Sealyham Terrier, I am not sure that we can maintain this attribute in our breed. A low tail set is very hard to find currently in the breed.

What medical conditions are the most common with Ceskies and how can breeders work together to diminish them?

Dr. Horak, who developed the breed, was quite ruthless in his breeding program to establish the breed and as a result, we do not have many health issues to deal with.

The most significant is probably the Scottish Cramp which tends to show up at about 6 months of age. Clearly, dogs with this affliction should not be used for breeding.

Fertility issues have also occurred. Cesky breeders could do more to share information about genetic issues that arise in their breeding program and help us all establish where the problems originate and amend our breeding plans accordingly.

Can you guide us through your breeding process: do you breed your own studs or do you favor studs from external bloodlines? How do you decide on which bitch will mate with which male, what is your breeding plan's objective eventually?

I generally use my own males but have used another local breeder’s stock as well. I have imported dogs from Sweden and the Czech Republic with a view to getting diversity in my genetics. With the breed being relatively young and small in numbers there is not a lot of genetic diversity to be had.

Breeding Ceskies can be challenging with a lot of breeders having difficulty in successful matings. I have established a great working relationship with the Theriogenology department of a nearby veterinary university (University of Guelph) and do everything in my power to get puppies on the ground.

All males have a thorough breeding assessment is done (morphology of the sperm is often an issue) and I only use the ones with viable numbers and % normal sperm. The females are cycle checked to ensure the breeding takes place at the optimal time. Most of my bitches do not follow a normal cycle and need to be bred quite late. We know this from trial and error.

Males that I have imported as adults will breed naturally. The ones that came to me as a puppy or are products of my breeding program generally will not (the girls are in charge!). If that is the case I do two transcervical inseminations with my specialist. I am happy to report that my success rate is very high as a result of the 15-year partnership with my specialist.

Who to breed is basically a matching up of pedigrees to ensure the inbreeding coefficient is not too high. I aim for under 10%. I also look at the individual dog’s contribution to the mix and there are a few known dogs that should be avoided. The sire and dam should be compatible in terms of joining their strengths and weaknesses together.

I am generally pleased with the foundation stock that I currently work with. Breeding for a sound outgoing temperament is also important to me. Too many North American Cesky Terriers are too timid.

How many litters are you having each year on average?

Currently, I have 15 adults in my kennel with 5 of them looking for retirement homes. I generally have 2 litters per year with a preference for whelping dates in January/February so the pups go home in the spring.

Diet-wise, what do you feed your Cesky Terriers?

I feed a local kibble which has a combination of chicken lamb and salmon as the protein. It is called TLC Pet Foods in New Hamburg, Ontario. They have a good breeders program and deliver the food to pet homes and to breeders anywhere in North America for free. I have been feeding this for seven years and the dogs have done very well on it.

Are you giving any supplements to your dogs or champions?

I give the breeding males an Omega 3 fish oil supplement on the recommendation of my specialist. The last male I imported was tested shortly after arrival and the semen was not great. He had successfully bred several litters in the Czech Republic. My Theriogenologist recommended that we put him on Omega 3 and retest in 2 months as sperm regenerates in 2 months.

We did and his second test was very acceptable for breeding purposes.

Last one… Any advice you would give to newcomers who would like to breed Cesky Terriers or just get involved in dog breeding?

With rare breeds, it is important to establish some good connections with successful breeders and gain their trust, advice, and support. This is not just a local effort but a global one.

Plan to visit other countries and go to shows. Meet the breeders and ask for their advice and assistance. Getting to know people face to face will increase your likelihood of obtaining good breeding stock and establishing life long friendships in the breed.