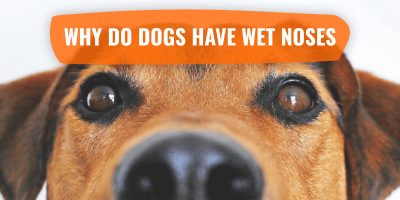 Many owners are either confused or concerned as to why their dog has a wet nose. This may be a factor that irritates owners when they are cuddling with their dog. However, it can actually show good health in your pooch. Multiple reasons exist for a wet dog nose including mucus secretion and them licking their nose.

Whether you are just curious about the biological reasons behind your dog’s wet nose or want to check they are healthy, this is the article for you. We explain and describe all the reasons why they will have a wet nose. We will also tell you when to be concerned and answer an informative FAQ at the end.

Why Are Dog Noses Wet?

There is not just one reason for a dog having a wet nose. The majority of reasons are either positive or reflect normal behavior. However, we need to be aware of when this symptom becomes a cause for concern.

The secretion of mucus actually aids our dog’s sense of smell. The mucus is secreted in the inner nose and exits the nose gradually and in minute amounts. This is why your dog’s nose will not appear to be running constantly. The liquid produced is slowly evaporated and should be clear and not too thick. What takes place biologically within your dog’s nose canal is the secretion of mucus from two glands. These do so to keep the inner canal damp for the increased absorption of chemicals detected during smelling. This aids your dog’s olfactory sensitivity and overall ability to smell.

A dog’s sense of smell is a communication tool as powerful as our voice. In the same manner, we rely on our sight primarily, dogs are known for the combination of sight and smell to be used to interpret the world. Smelling scents of animals, people, and even urine can be used as a perception tool. Without the olfactory sense, your dogs would not be able to properly communicate or understand the world as they should. Hence why a wet nose is so crucial.

Dogs Sweat Through Their Paws and Nose

Sweat glands exist in your dog’s paws and nose. When they sweat through these glands, the sweat will then evaporate, leaving your dog feeling cooler. You may think that sweat glands on the nose are an odd place for a dog to have biologically developed them. However, it actually is logical. As your dog’s body is usually covered in fur, this is an area with exposed skin which aids in evaporation speed and ease. Thereby cooling your dog off much more quickly and effectively. As your dog sweats, the liquid will settle on and around your dog’s nose.

The hotter the area your dog resides in, the more likely that your dog will begin to sweat from their paws and nose. This will result in a slightly damp and even dripping nose, depending on their temperature, and their fur density and length.

Similar to your dog’s fur getting wet in the rain or when they roll on damp ground, your dog’s nose may become wet from them putting it somewhere damp. The most likely conclusion is from your dog sniffing the ground, especially long grass. If the grass has been recently rained on and your pup is rubbing their nose and face in it, their nose will also become wet. This is the most likely conclusion if you live in a rainy state. Or if you let your dog outside after heavy rainfall. Also, if your dog particularly enjoys sniffing, this also increases the likelihood that they are rubbing their nose on varying areas of the ground.

Similarly, your dog may get a wet nose when drinking out of their water dish. They may dip their nose into the water dish or even flick water and spittle onto their nose to cause the appearance of a wet dog nose.

What if Your Dog’s Nose Isn’t Wet?

Just because your dog has a dry nose, does not mean they are ill. There are factors that affect how wet your dog’s nose is and is not a direct indicator of poor health. Factors such as moisture, temperature, and what has recently touched your dog’s nose all affect whether it may be dry or not. Contact your vet if symptoms such as redness, fatigue or a lack of appetite exist alongside a dry nose.

One explanation of a dry dog nose is if they were sniffing in dry or absorbent material, such as a blanket. Whilst sniffing, they may rub their nose on the material and cause the moisture to be removed. This is especially common in dogs with shorter muzzles. Another explanation is the temperature. If it is colder outside, this may cause your dog to produce less nasal mucus or sweat and therefore it may appear dry. This does not necessarily mean something is wrong, rather, it is an adaption to the cold. Sweat will occur less as they have no need to cool off. Similarly, if it is very hot, your dog may sweat more and after a while, gain a dry noise out of dehydration. Be aware of heatstroke and provide your dog with lots of water in high temperatures.

What to do if Your Dog’s Nose is Extra Wet?

A very wet or even dripping dog nose does not necessarily signify illness. It can be a sign of a mild cold, hay-fever, or even a blockage in the nose. An extra wet nose can be a symptom of illness and in order to identify the possible problem, you need to consider other factors. The thickness and color of the mucus should be observed alongside their behavior and interactions with their nose.

If it is spring or summer, and your dog is sneezing and itching alongside their runny nose, this is most likely hayfever. Indeed, hayfever is an allergic reaction to pollen. Check with your vet to see what the best treatment is, but usually, an antihistamine tablet can be given with their advice. Sneezing with a runny nose may also be a sign of a common cold, your dog will quickly get over this usually. Only be concerned if your dog is already vulnerable, such as being very young, very old or already having an illness. You should only become concerned if the mucus from your dog’s nose begins to change color and become extra thick. Thick yellow to green mucus is often a sign of an infection that requires antibiotic treatment.

To make sure you feel fully informed on the topic of wet dog noses, we have comprised an FAQ of the four most searched questions.

Is my Dog Healthy if they have a Wet Nose?

Although a wet dog nose is generally a sign of good health, it does not guarantee this. You must be aware if the mucus from their nose is of normal thickness and color, alongside their other physical and behavioral symptoms.

For example, your dog may have a healthy wet nose but may be coughing and show signs of fatigue. All illnesses and diseases have different symptoms. Therefore, your dog may be ill whilst they have a normal wet dog nose. Furthermore, just because your pup has a wet nose and does not display other symptoms, does not mean they are healthy. Dripping mucus or sweat from the nose can be a sign of an infection or blockage in the nasal passage. Always check if the mucus on your pup’s nose is normal.

Do all Dog Breeds have a Wet Nose?

Although all breeds have some level of a wet nose, some breeds will have more of a wet dog nose than others.

Research shows that brachiocephalic breeds tend to have drier noses. Although there are multiple reasons for this, they all relate back to the base explanation of a small snout. Firstly, as their muzzle is smaller and flatter, they often rub their noses on the ground or on materials when sniffing them. This can cause the natural liquid on their nose to be rubbed off regularly. Another reason brachiocephalic breeds may have dry noses is because of the angle of their nasal cavities and due to stenotic nares. Stenotic nares is a condition seen in brachiocephalic breeds which causes them to have narrowed nostrils, this makes breathing more difficult but can also cause difficulty in the release of regular mucus of the nose from the nasal passage.

Why do Dog Noses get Dry when they Sleep?

The most common answer for this is that your dog will stop licking their noses whilst they are asleep. It can also be from them rubbing their noses on materials whilst getting comfy and sleeping. Furthermore, they are not sniffing nearly as frequently as they do whilst awake, so the mucus distribution is usually a lot less than normal.

Can I Apply Vaseline on my Dog’s Nose?

Make sure to never apply Vaseline on your dog’s nose as it can be toxic to them. Rubbing petroleum jelly onto your dog’s nose often causes it to be ingested, this can then lead to diarrhea and a build-up of toxins. These toxics lead to a condition called lipoid pneumonia which affects your pup’s lungs.