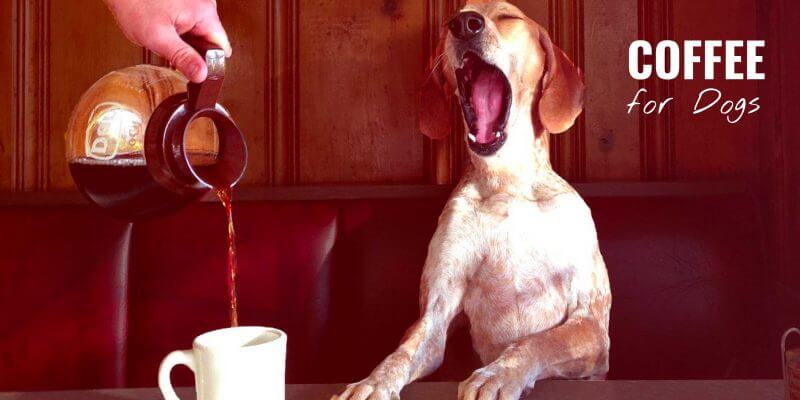 Is coffee for dogs a bad idea? It sure is. If you’re a caffeine monster who needs his morning cup of coffee to function, then you might have tried giving your pal a sip of the good stuff. However, coffee contains lots of caffeine which can even be fatal for dogs.

With that said, it’s obvious that dogs can’t have coffee. It’s one of those foods that are extremely dangerous for your pooch and that should always be out of its reach. It doesn’t matter whether you’re talking about coffee beans or brewed and ground coffee, because all of them are dangerous for dogs due to high caffeine levels.

But bear in mind that coffee isn’t the only food that’s high in caffeine. In fact, there are lots of other ingestibles that contain this toxic ingredient. These foods include diet pills, protein powders, soda, tea, tea bags, and energy drinks. So, make sure you keep your dog away from all of these food items or check the list of ingredients before buying.

In this article, we’ll go into detail on all the risks of coffee for dogs and discuss symptoms and treatments for caffeine poisoning.

Not at all. Dogs should never have coffee. The risks of coffee for dogs are too great to give it a try, especially as caffeine can often cause cardiac arrhythmias in the caffeinated dog.

If you love having a cup of coffee in the morning, make sure that your dog doesn’t get any of it. However, in the event that your dog licks a few drops, there’s not much to be worried about.

Generally, vets believe that 14 mg of caffeine per pound is enough to upset your pet. Bear in mind that a cup of coffee can have well over 100 mg of caffeine. This amount can be dangerous for an 8-pound dog.

But what to do if your dog drinks coffee but you don’t know how much? Well, it takes about half an hour for caffeine to enter the bloodstream. Until then, there won’t be any symptoms popping up. So, as soon as you realize your dog has had a considerable amount of coffee, rush to the vet.

The worst thing you could do at such a moment would be not to show any sense of urgency.

Sources of Caffeine for Dogs

Although coffee is a major source of caffeine, it’s not the only one. Many other foods contain caffeine in dangerous amounts for dogs.

All of these caffeine sources are dangerous for dogs and should be kept out of their reach.

With that said, the relative danger that these caffeine sources pose for dogs is dependent on the amount of caffeine they have. For example, carbonated drinks have a lot less caffeine than coffee. At the same time, diet pills have the highest amount of caffeine on the list mentioned above. So much so, that 1-2 diet pills could prove to be fatal for your dog.

But regardless of how much caffeine these sources have, just keep them far away from your dog’s reach. Never should your dog be able to get a paw on any of these, even if he shows you those puppy dog eyes. Remember: it’s a trap!

Symptoms of Caffeine Poisoning in Dogs

While a dog might collapse if it has consumed too much caffeine, the following are the most common symptoms of caffeine poisoning in dogs:

It’s always better to visit the vet as soon as you start seeing any of the above symptoms. However, there’s not much a vet can do to stop them.

The best way to stop caffeine poisoning is to induce vomiting in the dog. This would empty his guts from all the caffeine. However, the anxiety may still persist due to the caffeine that would already be a part of the dog’s blood. In order to reduce the heart rate, the vet might use sedatives.

Benefits of Coffee for Dogs

Well, as much as we’d love to give you a list of benefits of coffee for dogs, caffeine is actually dangerous for dogs and other pets.

In fact, you should make sure that it’s totally out of your dog’s reach at all times. This would ensure that no unfortunate incidents would occur with your dog. There is no exception for athletic dogs – caffeine is not to be administered to any type of dog, even for muscle building.

Rooffee – a coffee alternative for dogs

With that said, there’s a new type of dog coffee in the making that’s safe and beneficial for them. This coffee has no caffeine and actually, isn’t coffee at all (although it sure does look like it.)

Rooffee, as creator Agota Jakutyte calls it, is the world’s first coffee for dogs. It actually contains, hawthorn, carrots, chicory, dandelion, and burdock. All these ingredients are natural and healthy for dogs. So, you can definitely be on the lookout for when this product releases.

However, the name “rooffee” sparked quite a lot of debate in the dog world because it sounded quite similar to the “date rape” drug “roofie”. As you can imagine, this had a lot of people raising their eyebrows. However, Agota maintains that she didn’t Google the term as much as she should have. In fact, Agota says that the term “rooffee” was meant to be a mixture of roots and coffee.

Why roots? Well, that might be due to the presence of herbal ingredients in the coffee. Agota has mentioned on her Kickstarter page, however, that she would be renaming the product.

How much coffee is dangerous for dogs?

The dog caffeine lethal dose suggested by researchers is 150 milligrams of caffeine for every 2.2 pounds of a dog’s weight.

We’ve established that dogs should not have coffee. The risk of caffeine toxicity in dogs is too high when you’re dealing with coffee so you should always keep it away from dogs.

However, the question remains: how much coffee is dangerous for dogs? Surely, a little sip won’t hurt it. However, anything comparable to a nice long gulp could cause your dog’s heart rate to slightly increase for a while.

With that said, bear in mind that the safe amount of coffee for dogs depends a lot on their weight. We mentioned above that 14 grams of caffeine per pound can harm your dog. So, a cup of coffee with about 150 grams of caffeine could cause problems for a 10-pound dog but won’t be much of an issue for a 20-pounder.

However, please don’t take this as a green signal to let your large-sized dog sip on coffee because no matter what the size of your dog, coffee is certainly dangerous for it.

FAQs on Caffeine for Dogs

Alright, so for this article, I tried creating the most complete resource on coffee for dogs. We also discussed the risks of coffee for dogs and what you can do to avoid them.

However, there might still be some questions in your head. So, to tackle those, we’ve added this FAQ section in the end.

Coffee is high up on the list of human foods that you should never feed to your dog. Coffee contains a high amount of caffeine which is a stimulant for the body’s nervous system. If ingested in larger quantities, this stimulant could increase your dog’s heart rate, blood pressure, cause seizures, and could even prove to be fatal.

We all know that not all human foods are safe for dogs. In fact, if you don’t know whether a particular type of man food is safe for dogs then you should completely avoid it at all costs. However, coffee is one of those human foods that’s known to be fatal for dogs. It’s even more dangerous for dogs if they ingest coffee beans.

Is decaffeinated coffee bad for dogs?

Although safer than regular coffee, decaf coffee is still dangerous for dogs. You need to know that decaf coffee isn’t completely free of caffeine. However, it has 97% of the caffeine removed from it. This usually leaves behind about 7 grams of caffeine per cup.

Surely, such a low level of caffeine won’t be dangerous for dogs. However, caffeine isn’t the only dangerous chemical in coffee. In fact, it has theobromine as well.

In dogs, theobromine may cause severe diarrhea, hyperactivity, and agitation at as low as 9 grams per pound of your dog’s weight. Also, milk in decaf coffee can also cause lots of gastrointestinal problems in dogs as a lot of them are lactose intolerant.

Does coffee have the same effect on dogs as in humans?

No, in fact, dogs react to coffee in a vastly different manner than humans do. A lot of people can hardly function without coffee. We need it every day as this stimulant helps us feel more awake and energetic.

However, it’s a bit too stimulating for dogs. If your dog has coffee in higher amounts, the poor guy could suffer from caffeine intoxication. This can lead to a high heart rate which could even prove to be fatal.

What are the maximum or recommended doses of coffee for dogs and puppies?

According to most veterinary studies to date, there are no benefits of coffee for dogs. It only poses risks for your pooch so you’re better off avoiding all types of coffee for your dog.

Caffeine is one of the most famous pet toxins, so it’s better to avoid it completely. Also, if you give in once, your dog would make sure that you keep agreeing to its coffee wishes in the future.

Coffee for dogs is certainly one of the most dangerous foods. As a responsible pet owner, you should avoid it at all costs. Remember to never leave a cup of coffee close to your four-legged friend as he might decide to have a taste. In case your dog does drink a considerable amount of coffee, then rush to the vet as soon as you can.