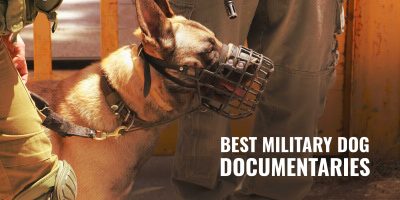 Military dogs commonly referred to as K9 or Police dogs, provide support and assistance to their handlers during specific missions. Many cover an incredibly wide range of duties while some breeds will have increased aptitudes at certain tasks.

General-purpose dogs will be used to search for missing people, suspects, and locate objects dropped or concealed. These dogs will also do extremely well at disarming violent, agitated and armed suspects and controlling hostile crowds. German Shepherds and Belgian Shepherds (Malinois) are mostly used for these tasks.

Other dog breeds, such as Spaniels and Labradors, are bred and trained to find more specific scents ranging from cash, drugs, explosives to human remains or blood. They will usually allocate one type of search to each dog so a particular dog excels at one task rather than becomes average at many.

We’ve listed here five amazing documentaries about the training and breeding of K9 and Military dogs. They let you sneak into the lives of US Marines in Iraq, British Met Police Officers in London, but also gives you a lot to think about on that immense bond between a police dog handler and his K9 dog. Their lives are on the line.

Filmed in Afghanistan, this 2-hour special profiles four military dogs and their handlers in the war zone as they locate insurgents and dangerous explosives. These couples are the best of friends in the worst of times. The US Military Office has granted this crew to be followed by reporters and carry special in-the-action cameras.

As heartbreaking as it is to see a fallen dog’s body draped in the American flag, what Glory Hounds does extremely well is to depict and deepen our appreciation for the trainers of these four-legged soldiers of America.

The program has a fair amount of feel-good filler about the bond between the dogs and their handlers, but when it comes to showing these pairs at work, it is blunt and disturbing.

The movie director, Harris Done, did an incredible job by letting us share the indestructible bond shared between a marine and his K9 dog. We have been incredibly moved by this military dog documentary that follows five K9 Marines from training to deployment in Iraq and Afghanistan. It shows us how the US Marine Corps dog teams behave on the front lines and how they lead such a risky life.

As an old K-9 handler (USAF and civilian police), I found this movie factual, accurate and heart-rending! Good job, Harris Done! It is obvious you know your subject matter!

This documentary is one of the best I have ever seen, not just because of the content-it is very interesting-but because of the way it really sucks you into the stories of the soldiers and their dogs.

Packed with tales of bravery, sacrifices, and heart-wrenching stories, Always Faithful is really showing more than just the eye-catching training of these dogs. It demonstrates their willingness to save lives and perform their job, regardless of the environment, changing variables and conditions.

Check out a great talk with Harris Done below, and you should order the DVD as it really is a superb documentary.

When the bombs went off at the Boston Marathon, highly trained dogs were rushed to the scene to search for more explosives. Boston police have said sniffing dogs swept the streets in the morning and a second time just an hour before the first marathoners crossed the finish line.

Since 9/11, dogs have been used more than ever within the armed forces of the United States and other Western countries. This is simply because nothing has been shown to be more effective than the nose of a well-trained sniffing dog to find bombs.

This documentary is rare because most of what these armed officers do is classified but “60 Minutes” was allowed to speak with the teams training America’s most elite dogs and military dog handlers.

4. Send In The Dogs UK Series: The Metropolitan Police

Send In The Dogs is a British documentary split into four 45mn episodes about the work of the Metropolitan Police, British Transport Police, West Yorkshire, Greater Manchester Police’s police dogs.

An interesting point with the United Kingdom police forces is that most of them are not carrying any firearm or weapon, it has been a policy enforced by several governments in order to create trust between the police and the people. The police dogs in the United Kingdom have increased importance to their police handlers as they are their most efficient weapon.

The British K-9 teams are visible everywhere, from the transport networks in major cities like London and Manchester to the rural areas in the country. Malinois, Spaniels, Border Collies, and German Shepherds are amongst the breeds used to perform various policing tasks such as drug-sniffing, IED and bomb detection, human tracking, criminal arrests, and neutralization, etc.

Split into five small episodes of 6-10 minutes each, the Puppy Police Academy is a little insider glimpse at the progress of a group of German Shepherds, or Alsation, puppies as they are put through their paces at the sprawling greenery of MPS Dog Training Establishment in Keston, Kent. From dog breeding to dog training, they share with us incredible moments we all love to witness.

Handlers and dogs from all over Great Britain, Europe and many parts of the world attend the MPS Dog Training Establishment for a variety of courses. The department uses proven military dog breeds such as German or Belgian Shepherd Dogs, Labradors, and Springer or Cocker Spaniels.

We’ve embedded below the trailer of the Puppy Police Academy but click here to watch the five episodes on YouTube.

We really hope you enjoyed these dogumentaries as much as we did, and let’s have a sincere thought for all those courageous dogs who are every day facing various kinds of unexpected danger, be it abroad or within our own cities.

Dogs, we salute you.